Winnetou Films as an Incentive for Development of Velebit 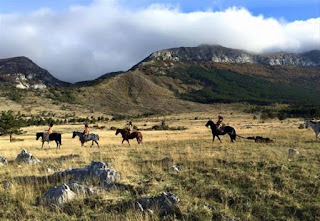 The latest films about the Indian Winnetou, a continuation of the European hit trilogy from the 1960s which had been filmed in the areas of Velebit, Bukovica and Ravni Kotari, are again being shot on various Velebit locations, reports Slobodna Dalmacija on October 30, 2015.

For the new three-part film series, German producers have selected several locations in Croatia, from Grobnik to Trogir, including, of course, the "native" habitat of the Apache tribe led by Chief Winnetou in the Zadar hinterland. Due to the filming, Velebit and Starigrad-Paklenica have become permanent meeting places of fans of the westerns who have through the years given impetus to the development of Winnetou film tourism.

The shooting of the new film series began in August 2015 and lasted into October. The crew filmed at Veliki Rujan as well as a very attractive area on the ​​Velebit Mountain near Starigrad.

Interestingly, the filming at Veliki Rujan would never have taken place if a mountain road which leads from Veliki Vagan to Veliki Rujan hadn't been built this past August. It is a part of the 13.6 kilometers long road Starigrad-Paklenica-Veliko Rujno. Construction was financed by Hrvatske Vode and Hrvatske Šume. After the Croatian Army built the first section of the road from Starigrad, in Veliko Rujno about 50 old houses and shepherds' dwellings have been renovated.

In addition to filming, the local church was visited by thousands of pilgrims for the Feast of the Assumption. Therefore, the initiative board to designate Veliki Rujan as a national Marian shrine has been established. The board has plans to raise a Cross at the site, as well as numerous other plans for developing the whole area, and has lobbied for the construction of further roads as well.