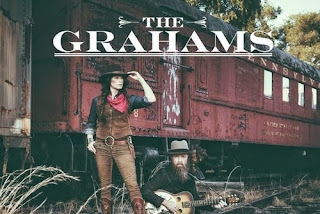 Somewhere in their history together, lifelong friends Alyssa and Doug Graham became an item, married, and decided to craft their gorgeous blend of Americana and folk music into the duo known as the Grahams. Earlier this year, the pair celebrated the release of their latest LP, Glory Bound, and on December 8th the Taste of Country was thrilled to debut the official (and old-school) music video for the disc’s eighth track, “Griggstown.”

“Originally, ‘Griggstown’ the song was inspired by Nathaniel Hawthorne’s novel The House of the Seven Gables and the image of a woman in danger running toward the house,” Alyssa tells us. “However, sometimes a video grows directly out of a song, and sometimes it spins off in a different direction, and creates a surprising complement.”

As Alyssa admits, that sort of surprise isn’t a bad thing.

“That’s the beauty of art and the nature of music and film. Though Hawthorne wrote his novel in the 1850s in America and The Unholy Four, directed by Enzo Borboni, is a classic 1970s Spaghetti Western, they both share many foreboding elements and they both make you feel a sense of defiance from the male lead in the film or the female lead in the song,” she says. “But mostly the distance from Griggstown to the Spaghetti West, and the way that casts the song in a new light, are what make us love this video.”

While it’s no easy task to take someone else’s footage and mold it to fit your own music — especially when the time between “Griggstown” and The Unholy Four is somewhere around four decades — it’s safe to say the Grahams have created an unforgettable viewing event for this particular track.

It shouldn’t come as a surprise that the Grahams concern themselves with both the visual and aural experiences related to their music. Coinciding with the release of Glory Bound, the Grahams unveiled Rattle the Hocks, a documentary that explores the relationship between the railroad and American roots music, all-the-while focusing on the live recording of the new record. You can grab details on the doc, the Grahams’ latest album and their complete tour itinerary at their official website: http://thegrahamsmusic.net/