Created by Armando Monasterolo, it was a quarterly journal published by the Journal Hokahey from July 1979 to April 1982, 12 numbers in the format 130 X 180 black and white, 96 pages. The comic book featured Josélito Heralde a young matador who is driven against his will into the Mexican Revolution and experiences all kinds of adventures between Mexico and the United States, alongside his friend the American journalist Nick Dundee. Mexico Matador Joselito is at the peak of glory when he suffers an accident. That's when he meets Nick Dundee, the type of journalist on the lookout for anything to make a scoop. Although he is sent packing, they will have to meet again because Joselito's career is on the decline while the Mexican Revolution is raging. He wants revenge for the bullfights organizer who has fired him, Joselito is involved in an assassination attempt to kill the current Mexican president.  Pursued by the police, he is forced to join the ranks of Emiliano Zapatta even as he condemns their violence. The first episodes are extremely dense with characters with finesse and are well drawn, as the series continues it falls into the classic duet of the adventurer and his stooges an awkward balance.  Despite this, Joselito remains an excellent series, which unfortunately is not appreciated at its true value. 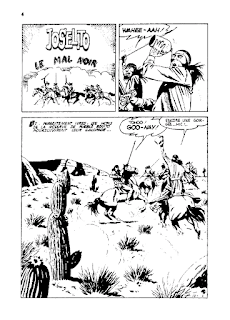 Armando Monasterolo was born in 1921 in Turin, Italy.  This writer / designer had been working on Robin Hood for Fleetway (in Thriller Comics translated into Oliver at Imperia), Capitan Giaguardo and Daniel Boone (1945) for Taurini editions. He produced illustrations for various publishers such as SAS, Paravia or SEI.  In 1949, he signed for Boldness The predatory and Harry Fox for Arc editions. The following year, he made it Giustiziere del West for Audace monitoring Graziella in 1951 to subalpino. He signed Ultimo dei Mohicani It Giornalino in 1952, translated by The Last of the Mohicans in the pocket of Imperia Prairie editions. From 1954 he produced cinéromans for Scolaro, which were so much in vogue. For Torelli editions, he wrote a few episodes of Pecos Bill, Manrico and Sigfrido (1957).  He wrote and drew in Acom Kid Colt 45 in 1965-67 and he produced numerous erotic stories in the years 1965-75.  He wrote and drew Naruto and Hook (Biondo Rampino e) in Lanciostory in 1970 (published in France in Great West pocket) and Josélito for Araldo editions. He provided some stories to Lug editions as Delgadito in Special Zembla, or the Lion Baroud Four Faceless Riders in Mustang (scenario A Mazzanti). He died prematurely in 1978 in Pietra Ligure.

Alfio Ticci is the younger brother of Giovanni Ticci (Tex Willer), born in 1944 in Montereggioni (Siena), Italy.  He worked for Lug editions, the Giolitti studio and CEPIM Bonelli.  He collaborated with his brother on Tex Willer and drew in Collana Rodeo The Esploratore Scomparso from Livingstone in 1978 (published in The Indomitable 7: Livingstone Find My Journal) and several episodes of Josélito in 1979, in a style quite close to that of his brother.  More recently, he worked on Penna, Pennini e Pennarelli G. Brunero and a eroe per amico (1998).

A. Gatti is a connoisseur and enthusiast of the classical theater. He has long been artistic director of the theater in the city of Moron in Argentina.  On his arrival in Italy in 1973, he works for Sergio Tarquinio Sergio Bonelli designing Josélito. He returned to Argentina in 1974. 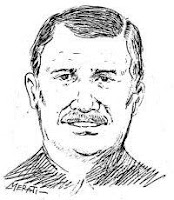 Luigi Merati was born in Milan December 13, 1944. He began in 1960 by working on comics on the lives of explorers to the Instituto Missioni Estere.  He directed episodes of the series for Dardo Eroica in 1970, graphically created Kosmos for Mondadori and produces erotic tapes for Edifumetto. In 1977, he joined the team of designers Bonelli Editore: and illustrates Josélito, Mister No, Il Piccolo store (Miki). He worked for Vietnam Eden editions and works on various comics such as westerns Corrier Boy Willy West in 1978-79 (text Cannata) and Tiramolla. In the 1990 he abandons comics to devote himself to illustration (De Agostini, Curcio and other publishers).  Recently, he drew again: Diabolik ("Un piccolo imprevisto", 2002) and Dolores in Special Rodeo (texts JM Laine).

Vicenzo Monti was born January 10, 1941 in Milan. A first assistant to Montanari on Goldrake in 1967, he then carried the marchesa for Candida Edifumetto in 1970 and other bands for adults and stories for various titles Universo editions (Intrepido, Il Monello) before drawing with Montanari and alone, Alamo for Lanciostory Kid (published in Karacal, and Alamo West Super Kid Sagédition).  Subsequently, he worked for Bonelli editions, with Mister No, Joselito (an episode in 1973), Ken Parker (with Bruno Marraffa, and an episode in 1979). In 1979, he designed Lungo Fucile and signed many covers on other securities as of Missaglia brothers Gil and from 1982 he became a regular cartoonists on Tex Willer. Monti died February 15, 2002.