Who Are Those Guys? - Michele Branca 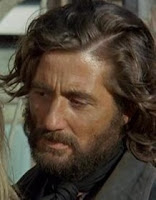 Michele Branca was another of those unsung supporting character actors that was usually seen in Euro-westerns as a henchman or gang member. Branca’s career lasted for about a ten year period from 1968 – 1977. During this time he appeared in around 20 films, 12 of which were Euro-westerns. Afterwards he drifted in stage acting. He was sometimes cast using the aliases Mchael Brank and Michele Francia.