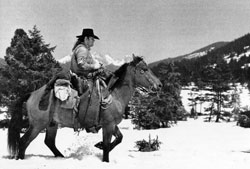 Dakota Territory, Winter 1877/78. Big Angy is a wolf trapper, with the nickname Wolfer. He is a good friend of the Oglala-Indians. He has long promised to marry the squaw Mountain Flower, who shares his life in his hut. When two cowboys rape and kill Mountain Flower, Angy swears to take revenge. He follows them through a cold winter landscape and on his way meets a wide variety of westerners. Finally he finds the scoundrels in a small settlement. But because he is a nice guy, he obliges to the saloon-owner’s request not to raise any trouble and doesn’t immediately confront them. Eventually he faces the cowboys in a show down, enraging the saloon-owner, who believes that the cowboys could have shown him the way to a goldmine.

This rare film was shown on Swiss television sometime in 1982, but was never released on video or DVD. A longer version with added footage was re-released in 1979 at 114 minutes.