Who Are Those Singers & Musicians ~ Dino 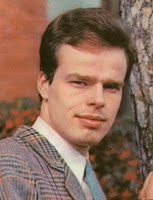 Italian singer Dino was born Eugenio Zambelli in Verona, Italy. He started his career as a singer of the group "I Kings"; in 1963 the group won the second edition of the Festival degli sconosciuti held by Teddy Reno in Ariccia; struck by the voice of the singer, Reno contracted Zambelli with his record company, with the stage name of Dino. Between 1964 and 1968 Dino was a real teen idol and a successful singer, with two major hit singles, "Eravamo amici" and "Te lo leggo negli occhi".

Also active as a film and a stage actor, Dino retired from show business in 1973, and he became manager of an oil company; he resumed his musical activities in the late 1980s.

Dino sang one of the best main theme songs of the Spaghetti western genre when he crooned “Bolero” for 1966’s “Django Shoots First” starring Glenn Saxson.