Who Are Those Gals? Clara Colosimo 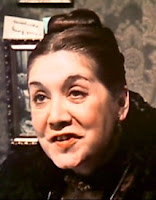 Clara Colosimo was born on May 23, 1922 in Conegliano, Italy. She studied opera as a mezzo soprano then went into theater reciting Beckett. She moved to Rome in the early 1960s to pursue a career as a theater actress. She made her film debut in Giulio Petroni’s “Tepepa” (aka “Blood and Guns”) in 1968. She would alternate between films and theater the rest of her career.

She was much appreciated by the most important filmmakers of 1960s Italian comedy, (as Pietro Germi who used her alongside Dustin Hoffman and Stefania Sandrelli in “Alfredo Alfredo”), her film career continued with the revival of such comedy films as “Satyricon” (1968) by Federico Fellini, and “Fantozzi subisce ancora” (1983) and in her unforgettable part of the concierge meddling in “La patata bollente” (1979) and Artemio's mother in “Il ragazzo di campagna” both with Renato Pozzetto. She also personified dramatic roles in “Novecento” (1976) by Bernardo Bertolucci, and distinguished herself in the character harpist, (one of the main roles) in the film “Prova d'orchestra” (1980) by Federico Fellini. Her last film was in “Atto di dolore” (1991) by Pasquale Squitieri. Clara suffered a heart attack in her home in Rome and died on June 15, 1994. She appeared in 65 films between 1968 and 1991 appearing in five Euro-westerns from the previously mentioned “Tepepa” (aka “Blood and Guns”) in 1968 to “White Fang and the Kid” in 1977.