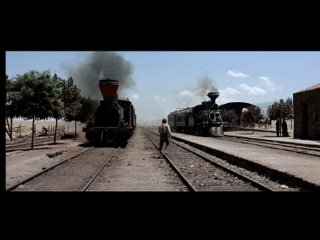 The Legendary Movie Bandito Zorro was based on a California Legend

El Bandito Joaquin Murrieta. Was he Real? Was he Killed as some Say? Or Did he Live On in California for Many more years after his rumoured, but not Confirmed Death in the Hills of Central California in 1853 ? This is a Story that Legends, Books, Movies are Made of..and it doesn’t get any more California than That…

Depending on a California pioneer’s point of view in the mid 19th century, Joaquin Murrieta was described by some as a Mexican Robin Hood of El Dorado ~ robbing from the Rich & Giving to the Poor, while others would say he was nothing but a Vicious Desperado ~

So many tales have grown up around Murrieta that it is hard to disentangle the fabulous from the factual. There seems to be a consensus that Anglos drove him from a rich mining claim, and that, in rapid succession, his wife was raped, his half-brother lynched, and Murrieta himself horse-whipped. He may have worked as a monte dealer for a time; then, according to whichever version one accepts, he became either a horse trader and occasional horse thief, or a bandit…

On May 11, 1853, Governor of California John Bigler signed a legislative act creating the “California State Rangers“, led by Captain Harry Love (a former Texas Ranger). The California Rangers were paid $150 a month and stood a chance to share the $1,000 governor’s reward offered for Joaquin Carrillo. On July 25, 1853, a group of Rangers encountered a band of armed Mexican men near Panoche Pass in San Benito County, 50 miles from Monterey. A confrontation took place, and two of the Mexicans were killed. One was claimed to be Murrieta, and the other was thought to be Three-Fingered Jack. A plaque (California Historical Landmark #344) near the intersection of State Routes 33 and 198 now marks the approximate site of the encounter.
The Rangers severed Garcia’s hand and the alleged Murrieta’s head as proof of their deaths and preserved them in a jar of alcohol.[1] The jar was displayed in Mariposa County, Stockton, and San Francisco, and later traveled throughout California; spectators could pay $1 to see them. Seventeen people, including a Catholic priest, signed affidavits identifying the head as Murrieta’s, alias Carrillo, so Love and his Rangers accordingly received the reward money.

The head was displayed at Gordons Museum in San Francicso through 1906, when the earthquake of 1906 destroyed that building. The head was originally sold by Billy Henderson of the Califonia Rangers for $35, who returned with it from the Arroyo Cantua where Joaquin met his end.

In the early 1850’s Joaquin Murrieta roamed this land. Most famous as an avenging outlaw or a Robin Hood, Joaquin Murrieta and his men were above everything else horsemen, and of the best of breeds. Wild horses, abundant in those days around the Sacramento Delta, were rounded up by Joaquin and his men and driven to Sonora, Mexico, where they were sold at high prices.

One of Joaquin’s favorite camps was at this spot because he claimed the water here was the best in the country where he rode. This fountain is over the artesian well that Joaquin Murrieta favored to water his herds of wild mustangs.

Zorro was created in 1919 by pulp writer Johnston McCulley. He has been featured in several books, films, television series, and other media.

Zorro (Spanish for fox) is the secret identity of Don Diego de la Vega (originally Don Diego Vega), a nobleman and master living in the Spanish colonial era of California. Not only is he much too cunning and foxlike for the bumbling authorities to catch, but he delights in publicly humiliating those same foes. 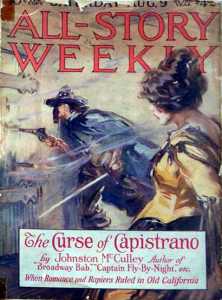 Zorro (often called Señor or El Zorro in early stories) debuted in McCulley’s 1919 story The Curse of Capistrano, serialized in five parts in the pulp magazine All-Story Weekly.[1] At the denouement, Zorro’s true identity is revealed to all.

Douglas Fairbanks and Mary Pickford, on their honeymoon, selected the story as the inaugural picture for their new studio, United Artists, beginning the character’s cinematic tradition. The story was adapted as The Mark of Zorro in 1920, which was a success. McCulley’s story was re-released by the publisher Grosset & Dunlap under the same title, to tie in with the film.

Due to public demand fueled by the film, McCulley wrote over 60 additional Zorro stories starting in 1922. The last, The Mask of Zorro (not to be confused with the 1998 film), was published posthumously in 1959. These stories ignore Zorro’s public revelation of his identity. The black costume that modern audiences associate with the character stem from Fairbanks’ smash hit movie rather than McCulley’s original story, and McCulley’s subsequent Zorro adventures copied Fairbanks’s Zorro rather than the other way around. McCulley died in 1958, just as the Disney-produced Zorro television show was becoming phenomenally successful.

When I was a kid my Favorite T.V. Show was the Disney version of Zorro. He was much cooler than SuperMan or Batman, rode a Black Stallion & Always had a Foxy Senorita on his arm…

Zorro was also a California Homeboy…a True Swashbuckler sporting True California Style.. And as we know, in Calfornia image is Everything, Fact or Fiction…it Doesn’t Really Matter… 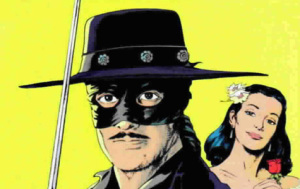 Thanks to Michael McQuarrie for this information.
Posted by Tom B. at 6:03 AM No comments: