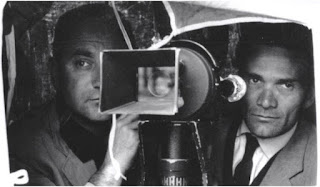 The documentary film 'Il Cinema Ritrovato' (Once Upon a Time ... Tonino Delli Colli Cinematographer) will be screened at the 'Il Cinema Ritrovato' Festival in Bologna, as a national premiere open to the public, a work commissioned by his son, Stefano, to fondly remember one of our greatest directors of film photography.

The film, made by Claver Salizzato and Paolo Mancini (Manafilm production) makes use of numerous testimonies, as well as some unpublished materials taken from Tonino's personal archive, and is inspired by the book Tonino Delli Colli, My Father. Between Cinema and Memories, published by Artdigiland in 2017.

Introducing the screening, scheduled for Saturday 29 August at 18:00 at the Odeon Cinema, will be the directors together with their son Stefano. Also present will be the niece, the film journalist Laura Delli Colli.
Posted by Tom B. at 8:32 AM