Today marks the 50th Anniversary of the premier of “Roy Colt and Winchester Jack”. Directed by Mario Bava and starring Brett Halsey, Charles Southwood and Marilu Tolo. The story is about Roy Colt and Winchester Jack who fail miserably at being outlaws, Roy resolves to dissolve the partnership and earn an honest living in Carson City. When he arrives at Carson City he’s greeted with a hero’s welcome along with a badge and a gun. The new sheriff gets that old familiar outlaws feeling when the nervous citizens entrust him with a copy of a stolen treasure map that is said to lead to a treasure of buried gold. Unfortunately for Roy, the mysterious Reverend, a dynamite-toting Russian outlaw; his old partner Winchester Jack; a Jewish desperado named Berenstein; and Mahila, a wanted Indian seductress, are also in pursuit of the gold. By the time Roy reaches the Indian burial ground where the gold is said to be buried, it's anyone's guess as to who will get the gold first. With everyone eliminated except Roy and Jack they start a fight over who’s gold it is while Mahila manages to escape with the treasure.

Rumor has it that the script was thrown away by Bava after the second day of filming and they wrote each days shooting as they went along. 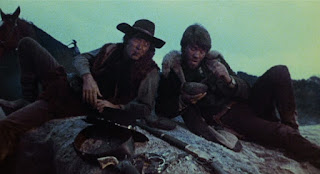