We continue our search for filming locations for “Day of Anger”. Slim calls to Scott and tells him to come out of the stable that Talby wants to speak to him. As Scott leaves Judge Cutcher tries to shoot him from his upstairs bedroom window. He misses but Scott doesn’t and shoots and kills him. He then shoots and kills Slim telling him, “You should never beg another man”. Another Talby henchman come up behind and Scott pretends to surrender but throws his pistol up in the air catches it, spins and shoots and kills the gunman stating, “You mustn’t trust anyone”. 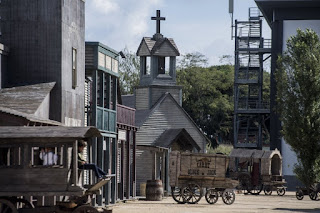 This scene was filmed at Cinecitta western town set. 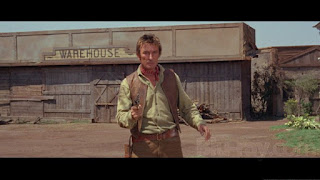 For a more detailed view of this site and other Spaghetti Western locations please visit my friend Yoshi Yasuda’s location site: http://y-yasuda.net/film-location.htm and Captain Douglas Film Locations http://www.western-locations-spain.com/
Posted by Tom B. at 6:34 AM