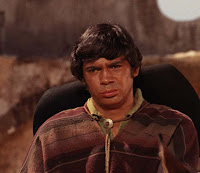 American actor of French and Spanish decent Reni Santoni died on August 1, 2020 he was 81. Born in New York City on April 21, 1939, he began his acting career appearing in Off-Broadway theater. His first significant film role was an uncredited appearance in the 1964 film “The Pawnbroker” (starring Rod Steiger), in which he played a junkie trying to sell a radio to the title character. He’s probably best remember as Chico, Dirty Harry Callahan’s partner in “Dirty Harry” (1971) starring Clint Eastwood. His steady career employment, however, has been on the small screen. His 1970s series work consisted of ably assisting such crimefighters as "Owen Marshall, Counselor at Law" and "Matt Houston. Decades later Santoni received great attention from newer generations of audiences in his occasionally hilarious recurring role as "Poppie" the unsanitary restaurateur on "Seinfeld." Rene appeared as Max in the Euro-western “Guns of the Magnificent Seven” (1969) starring George Kennedy and Michael Ansara.
Posted by Tom B. at 7:37 AM