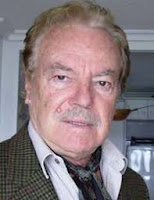 Spanish actor Manuel Gallardo Lechet died in Madrid, Spain on August 21, 2020. He was 85. Born in Cardeña, Córdoba, Andalucía, Spain on May 3, 1935, Gallardo made his name mainly as a stage actor but also appeared in some 40 films and television series such as ‘Verano azul’. He was married to actress María Jesús Lara and was the father of actress Nuria Gallardo. Manuel appeared in one Euro-westerns as Captain Burton in 1973’s “Another Try, Eh Providence?”
Posted by Tom B. at 8:17 AM