Today marks the 50th anniversary of the Italian premier of “Ringo It’s Massacre Time” starring Mickey Hargitay and Jean Louis. The film tells the story of Marshal Slim Farrell (Jean Louis) under the disguise as the gunslinger Ringo, who arrives in a village on the border between Mexico and the United States to shed light on the disappearance of his brother. Ringo is soon hired by the landowner, Don Juan. Meanwhile, the village is ravaged by a string of murders by poisoning and it does not take Slim long to discover that among the victims is his brother Mike (Mickey Hargitay). The subsequent investigation leads Slim to identify two women – Pilar (Lucy Bomez), daughter of Don Juan (Omero Gargano), and the crazy girl's mother as the instigators of the crimes. Clearing up the mystery and bringing justice to the village, Slim then rides off.

This film has always been puzzling to viewers as Mickey Hargitay is listed as the star but disappears from the film after the first 15 minutes or so. I asked Mickey about this film and he told me that while making it he got word that his ex-wife Jayne Mansfield was doing a photo shoot at Jungle Land in Thousand Oaks, California and had brought their three children along to see the animals. During the shoot a tiger got loose and mauled Zoltan Hargitay. When Mickey was notified in Italy of the accident he could not find the director or any of the producers, fearing Zoltan was badly injured he left the film site and caught the first flight back to Los Angeles from Rome. When the producers and directors could not locate him they were forced to hire Jean Louis and change the script. Later Mickey was sued for leaving the film without permission  and was ordered to forfeit his salary. 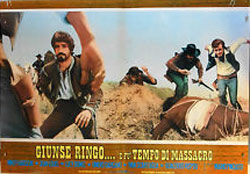