There are several films caught in the frames of the Leone Dollar Trilogy films.

For a Few Dollars More 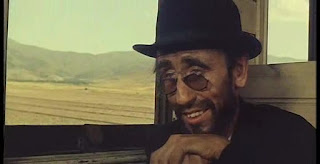 There is a car passing outside the window after the conductor collects the tickets and acto Jose Guzman as a peddler tells Colonel Mortimer that the train does not stop at the Tucumcari station. The car is seen in the distance, moving from lower right to upper left and driving at high speed.

During gunfight at the climax of the movie, automobiles can be seen driving on a highway in the background.

The Good, the Bad and the Ugly 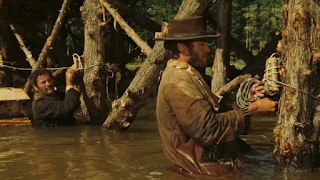 When Tuco and Blondie are under the bridge in waist-deep water strapping dynamite to the supports, a car passes from right to left where the poles form a V to the right of Blondie's hat just after Tuco says "You go first." 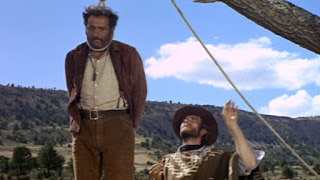 You can see a car passing by in the background when Tuco is balancing on the cross on the graveyard in the end of the movie.
Posted by Tom B. at 3:46 PM