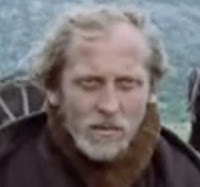 German supporting actor Fred Stillkrauth died in Munich, Bavaria, Germany on August 8, 2020. He was 81. Fred Stillkrauth was one of those actors who, despite engagements at the Kammerspiele or the Bayerisches Staatsschauspiel, were happily classified as a supporting actor, on the one hand, they lived quite withdrawn in their private lives and, on the other hand, on the stage and in front of the camera were great supporting actors. It doesn't matter whether Stillkrauth played Corporal Karl "Schnurrbart" Reisenauer alongside James Coburn and Maximilian Schell in "Steiner, das Eiserne Kreuz" (Cross of Iron), or alongside Gerd Anthoff in "Löwengrube" the detective Lederer or, perhaps one of his best roles, in 2008 in Munich crime scene "Der oide Depp" fascinated the retired chief detective Bernhard "Grandpa" Sirsch, Fred Stillkrauth with his finely sketched characters without excessive gestures. Born in Munich in 1939 he appeared in only one Euo-western 1973’s “Yankee Dudler” as Petrus Kapuszka.
Posted by Tom B. at 7:56 AM