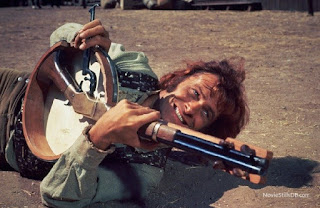 In the 1969 Euro-western Sabata we find a gunslinger hiding out in the town of Dougherty after some unnamed trouble in Denver, he seems to know everything that is going on in the palce, and tries to make money from both Sabata and Stengel. He carries a banjo everywhere. When the trouble he left behind in Denver catches up to him in the form of a group of five brothers out to do in the musical troubadour. When he’s called out on the street he carries his banjo which unknown to his opposition hides a rifle in the instrument. He starts to play a tune and the first few notes are identical to the opening of the main theme from “3:10 to Yuma” from 1957 starring Van Heflin and Glen Ford.

https://www.youtube.com/watch?v=vQ-NhyctOho
Posted by Tom B. at 5:25 PM