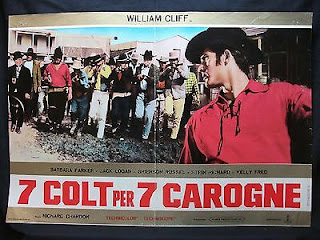 Ringo's twin Juan Olivera, who died defending the Mexicans in Texas from American racism, is mistaken for his deceased brother and assaulted by a group of fanatics. He manages, with the help of Bob Carlson, and Consuelo, to escape. Soon, however, circumstances prompt him to continue Ringo's struggle and to carry it on successfully. Reduced to impotence even the most egregious of the racists, Juan, returning to his farm, has the bitter surprise of learning that Consuelo was carried away by force by the gunman Jack Reed, to whom she had been linked in the past. Determined to marry her, Juan tries and finds Consuelo, but is challenged to a duel by Reed. Fearing that Juan might be killed, Consuelo shoots the gunman, but before he dies, he shoots Consuelo and kills her.
Posted by Tom B. at 7:13 AM