Voices of the Spaghetti Western ~ “Those Dirty Dogs”

As we know most of the Euro-westerns were co-productions from Italy, Spain, Germany and France which incorporated British and American actors to gain a worldwide audience. The films were shot silent and then dubbed into the various languages where they were sold for distribution. That means Italian, Spanish, German, French and English voice actors were hired to dub the films. Even actors from the countries where the film was to be shown were often dubbed by voice actors for various reasons such as the actors were already busy making another film, they wanted to paid additional salaries for dubbing their voices, the actor’s voice didn’t fit the character they were playing, accidents to the actors and in some cases even death before the film could be dubbed.
I’ll list a Euro-western and the (I) Italian, (S) Spanish, (G) German and (F) French, (E) English voices that I can find and once in a while a bio on a specific voice actor as in Europe these actors are as well-known as the actors they voiced. 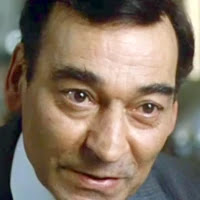 Manuel Cano García was born in Zaragoza, Spain on April 5, 1926. He began his career as a radio announcer on Radio Zaragoza, in 1947 . Years later, in 1951, Cano moved to Barcelona, where he began his artistic career as a dubbing actor. After having worked at RNS and Radio Barcelona, he decided to leave radio in 1965 to dedicate himself fully to dubbing films, in which he had started in 1952, at the Voz de España SA studios in Barcelona. His first major role was voicing Stephen Boyd  in "Beh-Hur” (1959). After the lack of work in Barcelona and his disputes with some studios in Barcelona, ​​in the mid-70s, he decided to move to Madrid, where he would double until the end of his career (sometimes returning to Barcelona to dub). His quiet, medium, and supple "handsome boy" voice was just right for dubbing the Hollywood hunk of the 1960s and 1970s. Internationally renowned stars like Steve McQueen, Warren Beatty, Anthony Perkins, George Peppard, Yul Brynner, Sidney Poitier, Glenn Ford, Alain Delon, Lex Barker, Henry Fonda, Michael Caine, Gary Cooper, Tony Curtis, James Garner, Richard Harris, Franco Nero, Gregory Peck, James Caan or Robert Redford. He dubbed Max von Sydow as Jesus of Nazareth in “The Greatest Story Ever Told” in 1965. Cano considered Jack Nicholson the best actor of all time he voiced. He was considered by his colleagues as the voice of the leading man and possibly the most beautiful voice that dubbing has created. At the end of the 1980s he was diagnosed with lung cancer and died on April 14, 1994. in Barcelona, Spain.
Posted by Tom B. at 5:10 AM