Who Are Those Gals? Marie-Pierre Casey 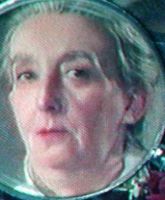 Marie-Pierre Casey was born on 24 January 1937 in Creusot, Saone-et-Loire, France. She studied at the Conservatoire de Lyon and Cours Simon. Casey began to find success with her roles as a housekeeper in the television shows’ Co-Co Boy’, ‘Cocoricocoboy’ and ‘Cluedo’. She is one of those actresses, like Florence Blot, who made themselves known to the general public by appearing in advertisements on television. In 1984 her famous "And it's so much better because I would not do that every day ..." in a commercial for the duster Pliz of the company Johnson & Johnson where, dressed as a cleaning lady, she slides on her belly, with an open apron, over the entire length of a large board table to remove dust, was a great favorite of TV viewers. She also released a song the same year on her You Tube channel “I'm a sex symbol”.

She played a grumpy janitorial role on the television series “Marc and Sophie”, broadcast for five seasons between 1987 and 1991. She has performed several one-woman shows.

Her lone Euro-western role was as Ma Cassidy in the 2004 film “The Daltons” starring the comedy team Eric & Ramzy.