Spaghetti Western Trivia ~ Another Cut Scene from “The Good, the Bad and the Ugly” 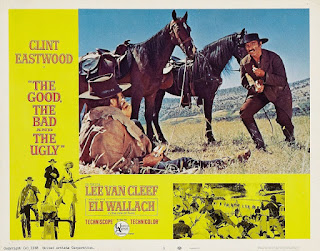 We’ve often seen the lobby card above and figured it was a publicity still. The photo is actually taken from a scene that was later cut from the original production. The scene takes place when Blondie and Angel Eyes are riding to Sad Hill. They stop for a bite to eat and Angel Eyes explains to Blondie how he became involved in the hunt for the $200,000 dollar treasure.

Prairie landscape with a river. Blondie and Angel Eyes are riding side by side. They come closer together, slow down, and then stop at a river bank.

They get down from their horses, and while the horses are drinking, Blondie lights a cigar and says,

"what have you got to do with this business?"

Angel Eyes sits down on a stone and replies,

He takes some smoked meat, bread, and a bottle out of a bag, and continues,

"And I happened by chance to come across it..."

He takes a knife and begins to cut the bread and meat into portions, then extends his explanation:

"During the first months of the war, a detachment of confederates escorting 200,000 in gold were ambushed...only two survived, wounded, a guy called Stevens and Captain Baker..."

Angel Eyes gives Blondie some of the rations and adds,

"When reinforcements arrived, the 200,000 dollars had disappeared. Obviously, the attackers had taken it...at least, that was the conclusion of the inquiry."

Angel eyes takes a drink and then gives Blondie the bottle. He continues:

"Okay, one day someone tracked me down and offered me 500 dollars to assassinate some guy..."

"Nothing too unusual...except the contract giver was Captain Baker, and the target was a certain Stevens...I knew about the inquiry, as did a lot of people...I quickly realized that I was a player in the quest for 200,000 dollars...Stevens happened to disclose to me that there was a third person who had survived the ambush... and he was the one who has disappeared with the case of coins..."

Angel Eyes lights his pipe and proceeds with his story:

"So far, so good...I shoot Stevens, because Baker had paid me... [he laughs]. I kill baker since Stevens had paid me to do the same... That left just me and Jackson, who in the meantime had changed his name."

"The rest is simple. We found Carson [Jackson's new identity] before you."

"Exactly, I was out of the game...but there was still one more chance for me...that someone had found Carson alive and that Carson had talked..."

Angel Eyes takes another drink and begins to pack away the leftovers. Blondie enquires

"Why did you volunteer?"

"Well, I was transferred to Betterville camp. There are times in life when running away from the situation doesn't help anymore. You need to sit where the life flows past you... You throw out the net and you hope that you catch the small fish...My chances were one in a million (he laughs). As you can see, I had luck."

Angel eyes gets up, followed by Blondie, who does the same. They go to their horses. Blondie ties his own bag onto the horse, just as the nervousness of the horse, as well as his own sixth sense, make him aware of a threat.

He looks about and observes...on top of a small hill, a long way in the distance, are five motionless riders. Blondie turns to Angel Eyes, who does not appear to have noticed the menace. He then climbs onto his horse, but before he sets off, he turns to look...

The five riders are no longer there. 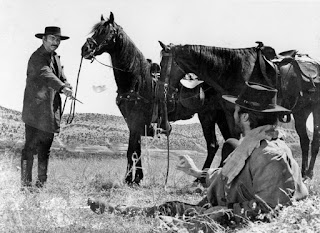