We continue to our search for filming locations for the 1970 film “Adios, Sabata”. After the gold shipment leaves Skimmel’s headquarters we see Sabata, Escudo and his me prepare to ambush the wagon. Before they can carry out their plan the wagon is ambushed by rebels. One of the Austrians in charge of the wagon jumps in the back and opens fire on the escort with a Gatling gun killing all the Austrians. When three of Escudo’s men, Jose, Jesus and Juan, rejoice and run down the hillside proclaiming victory for the revolution they are shot and killed by the Austrian. Sabata goes into action killing the men on the wagon. When he and what’s left of Escudo’s band, get to the wagon they find it is Austrian’s dressed as rebels. Another Austrian soldier who has escaped the massacre spies on them and returns to report to Colonel Skimmel. Sabata and Escudo’s band drive off with the gold. 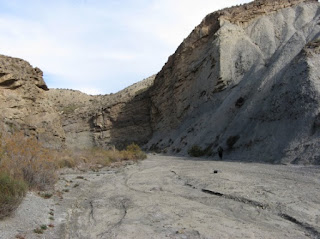 The scene was filmed in Almeria, Spain’s Rambla Lanujar 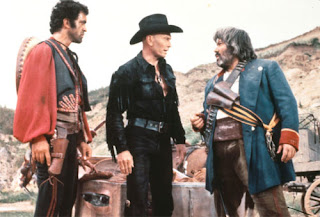