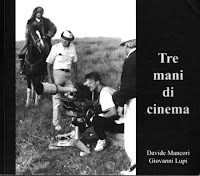 A photographic collection of sixty-five large-format images drawn from the most important sets of cinematic history in a surreal grotesque story.  Tre mani di cinema (Three hands of cinema) is the story of a relationship between father and son, told through movie images.  Telling your personal life is easier through a filter (in this case, cinema, for others it can be work and even soccer).  It is the story of parallel lives that have been encountered several times, of two men who, while loving and detesting, have never managed to overcome the common mistrust that has accompanied them for many years.  All this until the death of Sandro, his father.  Then, thanks to the finding of a wooden box that David, his son, found in the house of his father, a relationship was established between the two that in life was not possible.  The time machine of those pictures goes back to the early forties and back again.  The films by Vittorio De Sica, Luchino Visconti, Pier Paolo Pasolini, Totò, but also Burt Lancaster, Frank Sinatra and Yul Brynner is told by Sandro so as to remember the years he lived behind the noisy 35mm camera.  Real life and cinema life merge, between generational conflicts, curiosities and anecdotes.  It is the cinema told by the world of craftsmen and technicians whom Sandro and David belong to.  Walking through the Dantesque group where Sandro was comfortable, in the company of many of his colleagues, you will read about a never forgotten cinematography and a sincere affection relationship between two men who only made the film fiction possible.

Giovanni Lupi, Rome 1969), is a filmmaker (screenwriter, director, operator, editor of short films and documentaries), painter with recycled materials, poet, writer, stories and novels, theatrical texts.
Posted by Tom B. at 6:03 AM