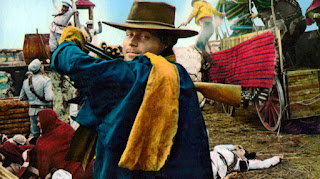 The Murdoch-controlled pan-European paybox has already successfully spawned several Italo skeins for the global marketplace such as “Gomorrah” and “The Young Pope.”

Co-produced by Italy’s Cattleya, now controlled by ITV, and France’s Atlantique Productions, ‘Django’ is being described as a high-concept reimagining of the cult 1966 Sergio Corbucci Western that launched the career of Franco Nero (pictured), but with the grit and edginess of today’s premium TV.

The show will not take its cue from Quentin Tarantino’s 2012 homage “Django Unchained.”

Instead “It takes the atmosphere of Corbucci’s original Italian movie, but with a super modern script,” said Sky Italia content chief Andrea Scrosati, noting that it has elements “that you would never suspect in a Western.” For instance, “a gay sheriff who obviously has to conceal that, which creates a psychological hurdle.”

The head writers on “Django” are Leonardo Fasoli and Maddalena Ravagli who both worked on “Gomorrah.” The director/showrunner is being kept under wraps.

“Django,” which will be Sky Italia’s first full-fledged period drama, is likely to become the first of several Spaghetti Western concept series being developed in Italy to hit global screens. “They could potentially open up an entire new genre strand,” Scrosati noted.