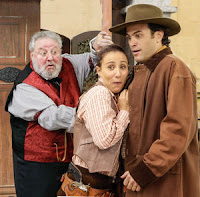 The Independent
By Heidi Massie
September 28, 2017

“It was the first time I ever laughed out loud at an opera,” said Rob Herriot, stage director for Livermore Valley Opera’s production of Don Pasquale opening this weekend at the Bankhead Theater. Herriot is staging David Gately’s Wild West version of Gaetano Donizetti’s classic comedic or buffo opera promising an evening of fun, laughs and amazing tunes sure to satisfy audiences. “It is a classic ‘spaghetti western’ complete with gun totin’ cowboys, saloon gals, horses and even a Mariachi band.”

Originally set in Rome in the 1840s, this production created by Gately, takes place 40 years later in the American Wild West and has entertained audiences for over two decades, never failing to keep audiences rolling in the aisles.

The main character, Don Pasquale is a wealthy old bachelor who has decided to take a wife so that he may produce an heir, cutting out his insubordinate nephew, Ernesto, out of his inheritance. Refusing to enter into an arranged marriage, Ernesto is devastated to think of a life without, Norina, a beautiful widowed woman in the village. Dottore Malatesta, a friend of Ernesto and Don Pasquale, helps the couple come up with a plan to trick Don Pasquale into giving the couple permission to be married with Ernesto’s inheritance. Disguised, Norina is married to Don Pasquale in a fake ceremony and then wreaks havoc on Don Pasquale’s life. After a series of hilarious hijinks, the plan works, and Don Pasquale allows Ernesto to marry Norina, stating that marriage is not suited for an old man such as himself.

“Don Pasquale and I have a very long history together,” explains Herriot. “The role of Ernesto is the first complete role I ever sang, and this was the very first opera I ever directed, which helped launch my career.”

In spring of 2001, Herriot assisted director David Gately at the Vancouver Opera who mentioned to him that a new production of his famous “Wild West” Don Pasquale was in the works and was to premiere at San Diego Opera (SDO). “I had seen the smaller, earlier version at the Canadian Opera Company, but what struck me about David’s production was that the story wasn’t compromised, but supported by the placement of it in the Wild West. When SDO called a few months later I jumped at the chance to assist David on this new production.

Herriot explained that Gately’s inspiration for the Wild West theme was rooted in composer Donizetti’s music that reminded him of a soundtrack from an old Western serial. “As I watched the production develop and listened, it became clear that this setting was perhaps the most perfect pairing of concept and piece. Interestingly enough, I now can’t picture Pasquale in any other setting.”

Herriot shared a fun fact about his experience with this opera. “A few years after its premiere in San Diego, I was setting this opera for Gately in Tucson, Arizona, and learned that in the late 1880s an Italian merchant who immigrated to the area had opened a mercantile, and guess what his name was? It was Pasquale!”

“I love Pasquale! Vocally, histrionically, range, is all perfect and is also the most human of all my characters,” said Peter Strummer who makes his LVO debut as the ornery old bachelor Pasquale. Strummer is known as one of America’s foremost character bass-baritones, and hailed for “giving a role maximum impact” by the Toronto Star. “I did this production a few years ago and loved it. When LVO’s artistic director Erie Mills asked if I would do it, I jumped at the chance.”

Strummer has worked many times with Rob Herriot, and finds him an ideal director. “He really works meticulously on details and has a real grasp of the comedy. He is one of the most congenial people I know. Erie has done a great job of casting this show. I'm having a ball.”

Alexander Katzman, LVO’s Music Director and Conductor, will bring Donizetti’s music to life for the opera, where audiences will here melodies reminiscent of old Western movies and televisions shows like Bonanza and Gunsmoke. Herriot explains: “There is a specific spot in Act Two, during the introduction to the love duet between Ernesto and Norina that has that western serial soundtrack feel, so keep your ears peeled for it.” 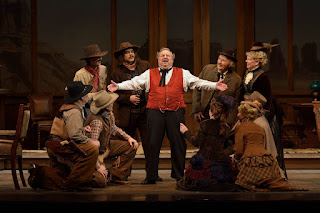