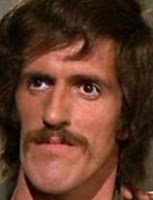 Italian actor, director Ugo Fangareggi died in Rome, Italy on October 20th. He was 79. He started out working as a dental technician, when in 1961 he was noticed by Luigi Squarzina who chose him to act in the play Ciascuno a suo modo. He later moved to Rome to devote himself to a professional acting career and in a short time he became one of the most active character actors in Italian cinema. Mainly appearing in humorous roles, he is best known for the role of Mangold in Mario Monicelli's “The Incredible Army of Brancaleone”. Fangareggi was also active in several TV-series of good success. He opened his own theater company Ugo Fangareggi Independent’. Ugo appeared in seven Euro-westerns: “The last Gun” (1964), “The Two Sergeants of General Custer” (1965) “Bullet for a Stranger, “Judge Roy Bean”, “Pistol Packin' Preacher (all 1971), “Massacre at Fort Holman” (1972) and “Seven Nuns in Kansas City” (1973).
Posted by Tom B. at 7:42 AM