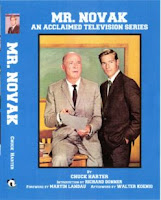 This is a profusely illustrated and comprehensive look at one of the finest dramatic
series that ever aired. It starred James Franciscus as teacher John Novak and Dean
Jagger as Principal Albert Vane with Burgess Meredith as Principal Martin
Woodridge. The show featured top quality scripts, actors and production and won
over 47 awards during its two year run including a Peabody Award for excellence.
This trendsetting program was the first to depict both teachers and students in a
dramatic and realistic manner and was very influential on the Educational
Community.

The book features 243 illustrations and index, including a complete episode guide
with full credits, plot descriptions, vintage reviews, and appraisals by the author.

“I’m so glad Chuck Harter is bringing the Mr. Novak experience to a wider audience…read his detailed behind-thescenes account.” – Introduction by Richard Donner.

“Chuck Harter has produced a superlative book that is both fascinating and informative.” - Foreword by Martin Landau. RIP

“You don’t have to be an actor…just a student to appreciate the skillful way in which Chuck Harter unfolds the stories behind the cameras.” - Afterword by Walter Koenig.

About BearManor Media: The award-winning and Pulitzer-nominated press publishes cutting-edge nonfiction books, audio books, and e-books on movies, television,
Old Time Radio, theater, and animation, as well as a fiction book series. Founded in 2001 by Publisher Ben Ohmart, the BearManor Media catalog now features more
than 900 outstanding subjects from the obscure to the eminent. Visit www.bearmanormedia.com.