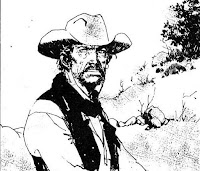 Comanchero is a white man who has decided to live among the Comanche Indians. Little is known about him other than his name is Dexter and that his guns always shoot bullets in the name of justice.

When Pete Mansfield assaulted a stagecoach and took a young woman because she seemed beautiful to him, he finished sealing his fate that he had forged as a criminal. Years before, before becoming a delinquent, Pete also used the last name Dexter.  And it's another Dexter, his brother, who is not known to anyone other than by his nickname "Comanchero", who captures him to bring him before the law. But destiny is cruel, intent on repeating the old quarrels between Cain and Abel. A group of Apaches attack them and Comanchero is forced to release his brother. Of course Pete cannot avoid his nature and betrays his brother, to be assassinated by the same young man that he wanted to see torture. 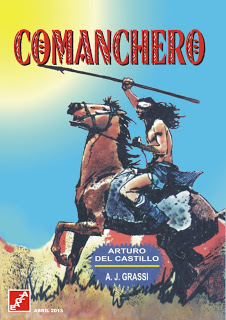 And in this erratic way, Comanchero continues living in a world filled  with wild injustices. Like that of Red Thunder, an Indian blinded by the desire for revenge, which only hastens the moment of his death. Or in the humiliation of the loyal Indians of Geronimo after accepting their surrender to General Crock.

But the most important event in his life, is to witness the death of the famous General Custer at the Little Big Horn, where his life was saved in order to tell of the soldier's bravery.

Comanchero must still roam beneath the impious sun of the desert, tracking bandits and killing criminals. Because law and justice do not know blood and races.

The comic book although Argentinian in origin was released in Spain with stories by Alfredo J. Grassi and Guillermo Saccomano, artwork by Arturo del Castillo.

This was a short series of four adventures usually found among other comic strips published in the 1970s such as “Lanciostory” and “Skorpio”.

Arturo Pérez Del Castillo was born in Concepción, Chile, on August 24, 1925 and was a cartoonist of Chilean nationalized Argentinean, of great recognition in Argentina and in the world. For a time he lived in the capital of his country, Santiago de Chile. In 1948, his brother Jorge, also am artist settled in Argentina, where he enjoyed some recognition, and summoned Arturo to travel to the Argentine Republic.

As a newcomer he begins to work in the Editorial Columba as a writer. Later he collaborates with drawings and illustrations. Among his first works is the adaptation of the film Vidalita for the magazine Adventures and the adaptations of classic novels for Interval. His work on The Man Who Laughs of Victor Hugo received recognition in Argentina and Europe.

In 1957 he landed in Frontera, where along with the founder of the magazine and screenwriter Héctor Germán Oesterheld he made his first great work: Randall, the Killer, a western later turned into a reference of the sort. The series was published in Hour Zero.

Later, with the slow decline of the Argentine cartoons, he begins to collaborate for the English publishing house Fleetway, in which he makes diverse literary adaptations. The most recognized were those of the Three Musketeers and The Man in the Iron Mask, both by Alexandre Dumas.

In 1979 he received an award in the framework of the International Biennial of Cordoba and in 1980 he was awarded the Yellow Kid for his career at the Salon de Lucca XIV, the highest recognition in the world comic. At the same time he also exhibited his work as a comic in the museum of the Louvre.