Alberto Dell'Acqua: "I hope to return to shoot a new film here." 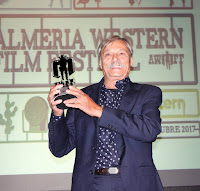 The Festival awards the 'Tabernas de Cine' Prize to the Italian actor to appreciate his valuable contribution to the western genre and his productive film career.

Italian actor Alberto Dell'Acqua has been very proud and grateful for the 'Tabernas de Cine' Award. "I started here, with a movie called '7 Pistols for the MacGregors'. The shooting was interrupted for four months and we had to go back in Italy. I also remember the movie that I shared with Elisa Montés in 'Texas, Adiós'. I am deeply moved and hope to be able to return to shoot a film, the new western project 'Keoma' that is currently paralyzed for economic reasons”, said Dell'Acqua.

The event was held in the saloon of the Western set of Oasys the Mini Hollywood village and was attended by the mayor of Tabernas, José Díaz, the director of the AWFF, Juan Francisco Viruega and the town official, José María Rodríguez. In addition, Alberto Dell'Acqua was accompanied by other guests of this seventh edition of the Almeria Western Film Festival (AWFF) as was the actress Elisa Montés, AWFA AWY 2017 Award.

The Almería Western Film Festival has thus delivered one of the two 'Tabernas de Cinema' awards that are awarded this year. "Dell'Acqua made his breakthrough in the mid-sixties with '7 Pistols for the MacGregors' (Franco Giraldi, 1966), and from the outset his face became a familiar and friendly presence in the spaguetti-western , sharing billing with such Spanish actors as Fernando Sancho and Elisa Montés. Some of these films were filmed in our province. He used to play young gallant cowboys, and combined this subgenre with adventure films and horror, gaining a lot of popularity in Italy and the rest of Europe, "said the director of the Festival, Juan Francisco Viruega.

A member of a family of traditional filmmakers, Alberto Dell'Acqua (Italy, 1938) was one of the most recognized faces of the European Western, a genre born and developed mostly in Almeria. The 'Tabernas de Cine' Prize is dedicated to his productive film career and his contribution to Western cinema. "His friendly face, youthful appearance and energy was transmitted on screen and his ability to provide tenderness and comedy to his characters, often mischievous rascals, allied with his gymnastic skills, was in the best tradition of the genre, he filmed his own fights and executed the stunts without doubles,” as described by the presenter of the event, journalist Evaristo Martinez.

Dell'Acqua, was known in some of his films as Robert Widmark, and was one of the most prolific actors of his time, participating in more than 40 titles, mostly westerns. He worked under the direction of such greats as Ferdinando Baldi, Franco Giraldi, Enzo G. Castellari, Mario Caiano, Giuseppe Colizzi, Giulio Petroni, among others.

The 'Tabernas de Cine' AWFF 2016 award was presented to actor Terence Hill. In previous editions has been given to the actor Sancho Gracia, the director Enzo G. Castellari and the actresses Monica Randal and Sara Montiel.