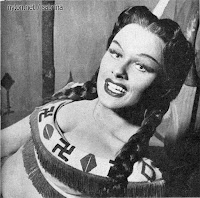 Sabrina, the onetime British model and actress once hailed as a British Marilyn Monroe died on November 24, 2016 but was just made public in British newspapers on October 7, 2017. Born Norma Ann Sykes on May 19, 1936 in Stockport, England, she became a household name when she appeared as a regular on the weekly comedy TV series ‘Before Your Very Eyes’, hosted by Arthur Askey. She appeared in a handful of British films including the Euro-western “Ramsbottom Rides Again” (1956) and the comedy “Blue Murder at St Trinian’s” with Terry-Thomas and Alastair Sim. Most parts were small and insignificant. She relocated to the US, where she performed in a touring cabaret. She moved to the U.S. and in November 1967 Sabrina withdrew from public life when she married Dr Harry Melsheimer, a wealthy Hollywood gynecologist. Sabrina suffered chronic back problems through her adult life and had several unsuccessful operations. In later years she was paraplegic. In 1990 her mother moved to Hollywood to look after her, but died five years later. Sabrina lived quietly thereafter, visited regularly by a small group of friends with whom she rarely talked of her colorful past.
Posted by Tom B. at 9:03 AM