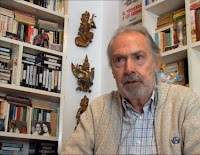 Italian producer, director, writer and actor Umberto Lenzi died today October 19 in Rome, Italy. He was 86. Born in Massa Marittima, Grosseto, Tuscany, Italy on August 6, 1931, Lenzi was known for contributing to Italian genres from politics to horror. The author of over sixty films between the 1960s and 1990s, Lenzi directed some real cult films that made him appreciated much more abroad especially by Quentin Tarantino. Among his most famous titles were “Milano odia: la polizia non può sparare”, “Roma a mano armata” and “Napoli violenta”. His Euro-westerns include “Samson and the Slave Queen” (1963), “Go For Broke” (1968) using the alias Humbert Humphrey and in which he also acted and “A Pistol for 100 Coffins” (1968).
Posted by Tom B. at 6:52 AM