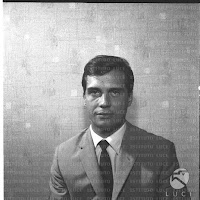 Italian supporting and character actor Romano Giomini died on March 2, 2017. He was 80. Born in Italy in 1936 Giomini appeared in over two dozen films from 1961-1967. He was a film and television editor after his film career ended. Giomini appeared in several films billed as Gordon Steve. Romano appeared in action films such as sword and sandal and crime and western films. Romano appeared in three Euro-westerns: “Stranger in Scramento” and “A Fistful of Knuckles” (both 1965) and $5.00 for Ringo” in 1966.
Posted by Tom B. at 7:19 AM