Who Are Those Guys? ~ Jose Caffarel 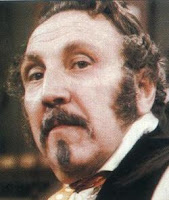 José María Caffarel Fábregas was born in Barcelona, Spain on November 10, 1919. He began engineering studies from which he was forced to interrupt with the outbreak of the Civil War. After the end of the war he dedicated himself to the cloth trade, which he combined with amateur theater.

Adolfo Marsillach discovered José and decided to incorporate him into his company, offering him the possibility of becoming professional actor. He made his debut in the cinema in 1957 with the film “El último cuplé”, directed by Juan de Orduña . It would be the first film in a long cinematographic trajectory that took to him to appear as a leading actor in more than 160 films. Among them, thanks to his mastery of the French, English and Italian languages, some international productions such as Henry Hathaway's “El fabuloso mundo del circo” (1964) and “Doctor Zhivago” (1965) by David Lean .

Throughout his career, he has also worked as a voice actor where his voice can be heard on hundreds of occasions.

He was the father of four children, including Carmen Caffarel professor of audiovisual communication and doctorate in Hispanic linguistics, who was Director of Spanish Radiotelevision between 2004 and 2007, as well as director of the Instituto Cervantes since 2007.

He died of a heart attack on the night of November 6, 1999 after a long illness.