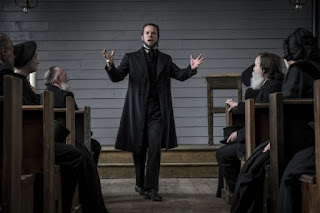 We’ve been raving about Dutch director Martin Koolhoven’s alarmingly grim, evocative and brutal neo-western/horror film Brimstone a lot lately and that’s because we want to make sure you see it. The film is not for everyone. It’s a violent, sexual and savage treaty about the misuse of religion and its catastrophic effect on good people, especially good women. In it, Guy Pearce (who has starred in the equally irreverent genre bending westerns The Proposition and Ravenous) plays a preacher from the bowels of Hell itself, a seething, spitting, muscled and maniacal force of nature who — as told in a schizophrenic narrative — tortures then pursues his mute daughter (Dakota Fanning) across the blood-spattered Wild West.

And Koolhoven – whose name sits defiantly above the title credit card – glues the entire fluid-caked nightmare together with stunning visuals, fevered music (by Junkie XL, more on that below) and a wealth of mesmerizing performances. This is Koolhoven’s vision and he hold court, defying you to stick with his intricately structured and often stomach-churning story to get to the moment of unforgettable grace at the film’s climax.

We reached out and got the chance to talk to filmmaker about his American debut, its influences, the music that propels it and the different ways in which it has been marketed.

Why is it that Europeans seem to make the best films about the American west?

Martin Koolhoven: Well, the thing is of course that the moment that you say that, I start thinking about some of the best fucking westerns ever, stuff by Sam Peckinpah, John Ford, you know. I think that for every great European filmmaker that made a great western there are two great American directors as well.  So I don’t know if its true that they’re better, but I agree that they are very good. My favorite film is Once Upon a Time in the West and that of course is made by an Italian filmmaker (Sergio Leone). So I think that somehow a European director is more aware of making a movie not in a certain setting, but exploring the very DNA of a country. You know what I mean?

CS: You nailed it. They have an objective view of a culture; less mythological and more caustic.

CS: So, you mentioned Once Upon a Time in the West and certainly, Sergio Leone used Morricone’s music to grand effect in that one. And here, you worked with electronic music icon Junkie XL…

Koolhoven: Oh yeah. I met Tom – his real name is Tom Holkenborg – I met him, I think, six years ago through a mutual friend and we started talking about film music and I told him what I thought film music should do.And I remember the discussion. I like to use music to the full extent, whereas some modern filmmakers don’t. At some point he heard I was doing a western and he asked if he could read the script. I gave it to him and he said “I have to do this movie”. So it was agreed. The way it worked was that we talked about it, what it was about and I discussed the musical influences I wanted it to have. We started sending a lot of music to each other that we thought would be relevant and so we tried to get a musical language between us. We sent lots of Bach. He had a specific piece he wanted to put in there. Bach’s music was very much based in religion and that made sense, considering the story. And Bach was an influence on Morricone and Bernard Herrman, so it felt right. I wanted the score to be old fashioned and yet still modern and Tom is a very modern composer so it was interesting employing that classical sound and having it filtered through his sensibilities. Normally when you do a movie, the soundtrack comes last. But not here. The music was made while we were filming and editing and so it influenced the edit and the edit influenced it. It was a wonderful process and I have never done it this way.

CS: And that’s the way Morricone and Leone did it too…

Koolhoven: Exactly. But somehow because of the economics of a movie and the time you need to make one, it’s just not something that ever happens anymore, it’s something no one does. But we said, hey, we ARE going to do it it this way. There was no ego. It was a real collaboration.

CS: Now Brimstone is many things. It’s a western and a horror film and an allegory and a thriller and…well, it’s lots of things. I loved the original poster, the monochrome black and white with the etched in cross, like a Lars von Trier poster. But the way the studio is marketing the film with the new art is suggesting it’s just a straight western. How do you feel about that?

Koolhoven: Well..(clears throat)…uh…let me be politically correct here and say that I had something to do with the first poster we did and I was not involved in the American one. At all. And maybe that says something (laughs).

CS: Many have cited this and I presume it was by intent but there’s a heavy sense of Charles Laughton’s Night of the Hunter in Brimstone.

Koolhoven: Yes, there’s no denying that. I mean, I think there are more differences than there are likenesses, but if you do a movie about such a dangerous preacher, it’s very hard not to be influenced by Night of the Hunter. Like, if you do a movie where someone gets killed in the shower, you cannot help but compare that to Psycho. I’m always afraid of referencing other films when making a movie because you must be true to the characters and as soon as you reference other movies, you feel thrown out of the movie. But in Brimstone for example, there’s a scene with a character and a rifle on the porch and I knew while I was shooting it that it was right out of Night of the Hunter but I felt that if I changed it, then it would not be honest. Because it grew organically out of the process and so I went with it. It is a reference to that classic sure, but it’s there naturally. And I think Night of the Hunter is one of the greatest movies ever made, by the way…