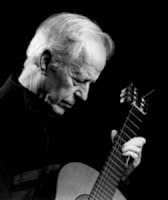 The great Italian maestro Alessandro Alessandroni, the famous whistler and guitar player of the Spaghetti westerns died March 26, 2017. He was 92 years-old. Along with his choral group “I Cantoi Moderni” he was a major influence on the genre from the outset. I was his whistling we heard on the opening credit sequence of “Fistful of Dollars”. His whistling and guitar work were used in numerous westerns as he worked with many of the composers of the day including most often Ennio Morricone and Francesco DeMasi. Alessandro played multiple instruments, including the guitar, mandolin, mandolincello, sitar, banjo, accordion, and piano, and composed over 40 film scores and countless library music.
Posted by Tom B. at 4:06 PM