We continue to our search for filming locations for the 1966 film “Navajo Joe”. After Joe surrenders Duncan takes him to the edge of town where Sancho beats him trying to get Joe to tell where the gold is. Joe refuses so Duncan begins to whip him in a frenzy. Jeffrey Duncan steps in and tells his brother to stop that a corpse can’t tell where the gold is hidden. Vee stops and tells his men to hang Joe up by his heels.

This scene was filmed at Torremocha de Jarama, Spain. 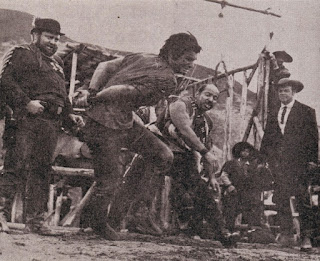