Who was Karl May? Facts and myths surrounding the creator of Winnetou


His character Winnetou was as famous as Harry Potter, but the life of best-selling author Karl May, born 175 years ago, remains shrouded in mystery. What is fact and what is fiction? 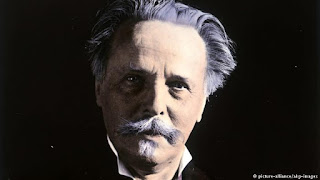 Fact or fiction: Karl May is the best-selling writer in Germany

Karl May (1842-1912) was the first best-selling author in Germany and is considered to be "the most-read German author," as Michael Petzel writes in his book on Karl May.

Unfortunately, exact figures to back up the claim aren't available, since May's books came out during a time when such records and electronic data collection did not yet exist. In addition, the publication history of the prolific writer's works is quite confusing. Many stories appeared as serial novels in newspapers and in penny brochures before they were released in book format.

However, the circulation of his work is estimated to be more than 200 million copies, including translations in more than 40 languages. Such numbers are topped only by today's biggest literary successes, like that of J.K. Rowling whose stories about Harry Potter and the Hogwarts School of Witchcraft and Wizardry have sold more than 450 million copies.

Fact or fiction: May wrote his book in prison

Actually, May was in prison more than once, often for petty theft and occasionally bizarre crimes, including stealing leftover pieces of candles. Often, the crimes were committed out of need. A skilled con man, he stole money, fur and once five billiard balls. In 1870 he had to spend four years in jail - his longest stay.

However, May found joy in his misfortune, as he was able to make use of the prison library. Reading through the many books, which May didn't have the chance to do as a free man, laid the foundation for his detailed research. He was then prepared to write the books that would bring him fame.

Fact or fiction: May wrote about trips that he had actually taken

May was meticulous with his research before he wrote his books. He devoured "geographic books, travelogues and classic adventure novels," writes his biographer Thomas Kramer. He found Indian terms like horse names Iltschi and Hatatitla (the horses of Winnetou and Old Shatterhand) in contemporary special interest books such as "Twelve Languages from the Southwest of North America," but he never conducted research on site. In fact, nearly all his trips took place exclusively in his imagination.

Nevertheless, May enjoyed presenting himself as a travel writer because it also explained his temporary absences, which were in fact prison stays, not exotic journeys. Others helped spread this myth. The editorial staff of the magazine "German Treasures in Words and Pictures" ("Deutscher Hausschatz in Wort und Bild") wrote in 1880 that May traveled to "all the countries that set the stage for his adventures."

Fact or fiction: Karl May never visited the places he described in his books

That was certainly not the case. When he published his first Winnetou story in 1875, May had never stepped foot outside of Germany. The same was still true when his adventure books became best-sellers in the 1890s. However, at the end of his life he took two long trips to some of the places he had written about in his books.

In 1899/1890 he went on a trip to the Middle East, and in 1908 he traveled to the US. But he didn't manage to reach the Wild West, where the adventures of Winnetou and Old Shatterhand played out. Instead, the writer, who was in poor health, ended his trip at Niagara Falls in the east.

Fact or fiction: Even Hitler was a Karl May fan

A newspaper reporter wrote of a 1933 visit to Adolf Hitler's house: "On one shelf stood political and state scientific works, some literature about the care and breeding of shepherd dogs, and then - German boys, listen up! Then came an entire row of - Karl May! - with Winnetou, Old Shatterhand, the Schut and all the beloved familiar characters."

However, there are no photos to prove this statement. There is also no proof that Hitler recommended his generals use May's war tactics, as has been alleged. It's likely that Hitler, like many of his contemporaries, was a Karl May fan, although May's late pacifist work was less likely to please the German dictator.

"Winni" Guttenbrunner, as she was called after her marriage, said in a 2009 interview that many had been envious of her special name - the author of this article included.