Jesus is a character created in 1976 by the Missaglia brothers, Ennio & Vladimiro, for the editor Geis. The total number of issues of Jesus released were 25 from March 1976 to March 1978. The artwork was drawn by Vladimiro Missaglia while the stories were written by Ennio Missaglia.

The character is charismatic and charming with blond hair, who wore a jacket with fringe which seemed to be a hippie version of the Bonelli characters, even if he does not have the mild spirit of the flower children. 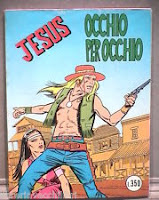 Jesus was a mythical name for the Gringo red man and his Western adventurers. Born during the years of the bloody Indian wars, in the endless primordial territory between Missouri and New Mexico, Jesus was an orphan and was brought up by an old Shaman. He grows up in the tribe, among the proud red men, with the qualities of courage and determination, cunning and loyalty ... without denying, however the nature of the white man! While still very young, he left the tribe, in search of his destiny ... he uses his Colt 45, only when he there is no other way in the game of justice and freedom.

A pure spaghetti western in the vein of Keoma with solid characters, ugly, dirty and bad. The Vladimiro Missaglia artwork is not inferior to those of the best artists of Bonelli.

A nicely done cartoon, with nice pacing and very accurate descriptions of his background with technical notes relating to weapons used by the characters, means and practices of the Native American tribe involved in his adventures. 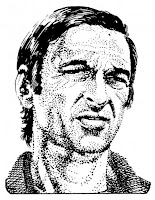 Ennio Missaglia was born in Venice, Italy on January 12, 1930. His early career see him collaborate with Edizioni Alpe and Fabbri, while also a first contact with the Forerunner of today's Sergio Bonelli Editore in 1959, when Missaglia writes for Tea Bonelli Edizioni Audace the series "The Musketeers Pacific", published as an appendix to “Il Piccolo Ranger”. For Mondadori, Missaglia which dramatized the Disney stories, published by the weekly "Topolino" (1960-1968), and almost simultaneously with a long association with Sagéditions of Paris (1962-1966), for which he wrote short stories translated later in Italy from Cenisio. In 1962, he continues the series "The Three Marines", conceived by Sergio Bonelli and published in the appendix of Tex, then the following year he grapples with "Pecos Bill" and the war series "RAF". Between 1969 and 1976, the Venetian author maintains numerous collaborations ranging from Ediperiodici to Edizioni San Paolo, reaching the German and French markets. The first meeting with “Mister No” takes place at the end of 1978 (dramatized the episode n. 42, on the subject of Nolitta, "The Days of Terror"), but the collaboration with Sergio Bonelli Editore (then Editorial Cepim), also creating two new series: “Judas” and “Gil”, both designed by his brother Vladimiro and Ivo Pavone. After the Japanese setting of the series "Kudo", published in France, and stories for "Tiramolla" and "Mickey Mouse", Missaglia returns to pilot the Jerry Drake Adventures in 1993. Unfortunately his career and life comes to an end in 1993.

Vladimiro Missaglia was born in Venice, Italy on May 14, 1933. After attending the nautical institute, he worked for his father. Fond of drawing, and thanks to his friend Giorgio Bellaviti he approaches the world of comics, working on the emerging issues of “The Bianconi Renato Bridge”.  He collaborated with Tommy Rey and Great Sakem, on texts by Gian Giacomo Dalmasso.  His first character, then published on Yumak, was Red Eagle.

From 1958 to 1959 he worked on the periodicals of Edizioni Alpe di Giuseppe Caregaro.  From 1959 to 1963 they are published by Fratelli Fabbri and various series - including “Under the Wigwam” - appearing on “Selezione dei ragazzi”.  In 1961 he draws for Albi dell'Intrepido, starting a large collaboration with his brother Ennio, drawing only his scripts.  They take off on the series for the publisher Bonelli, for the Sage, Fasani, Bianconi, Ediperiodici, Edifumetto and Geis.

He also creates covers and illustrations for more than fifty books published by the Institute of the Missions of Verona.

From 2008 at the Treviso Comic Book Festival, during the award ceremony of the Prize Carlo Boscarato of Treviso, he was awarded the Prize "Miro" Missaglia to emerging publishers and authors of Italian comics. Vladimiro died in June 8, 2008.