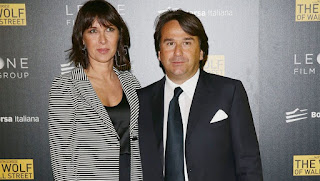 Amid Europe's changing and consolidating media landscape, the company of Sergio Leone’s children is eyeing its next steps.

Leone Film Group, the company of Sergio Leone’s children Andrea and Raffaella, debuted in Italy in 1989 and made some waves over the next 20 years in distribution and later in production. But in the last few years, the company has made itself into a powerhouse in Italy via a series of strategic partnerships across production and distribution and furthering its own content under their Lotus Productions banner.

The company's relationships and reach mean that it is virtually working with everyone in the country. Even foreign companies have taken note. “If you want access to Italy, the Leones are the chosen gatekeepers,” says one investor in the company.

Now the company, whose stock has been listed on the AIM Italia exchange in Milan since 2013, is looking to take advantage of its momentum to bring in new investors or maybe even strike a merger deal, sources tell THR.

The news comes amid a race to consolidate European media and entertainment assets across country borders. For example, Vivendi has been looking to move beyond its traditional focus on France to become more of a Southern European player, including in Italy. And BSkyB a few years ago acquired Sky Italia and Sky Deutschland from 21st Century Fox.

Leone Film Group insiders are understood to feel that the company's stock is undervalued despite a more than 50 percent run-up over the past year to 3.75 euros, or $4 a share. Analysts say the increase came in part due to the Bulgari family buying a 10.6 percent stake at a 50 percent premium last fall. The company's market value recently stood at 52.9 million euros, or $56.6 million.

Among the company's key deal with foreign partners are major procurement agreements with DreamWorks, Lionsgate and The Weinstein Company, making it the gatekeeper for key awards season films. Leone's distribution of La La Land this year alone brought in $8.5 million in box-office receipts in Italy.

The Leones also boast a 500-plus title catalog that includes their father’s films among other gems. They have deals with Italy’s top directors, from Paolo Virzi to Paolo Genovese. And they have been expanding the work of their TV production banner, introducing two new shows that they hope will enjoy the same global success of recent hit Italian shows Gomorrah and The Young Pope.

Academy Award winner Giuseppe Tornatore will serve as showrunner for the upcoming I Beati Paoli about the secret Sicilian sect that served as a precursor to the mafia. The other show is an old western, Colt, based on an original idea of Sergio Leone about a revolver passed from owner to owner. Gomorrah’s Stefano Sollima will serve as showrunner.

Aware of their clout, the Leones have also continued to lobby the government for better industry tax credits, aiming to put Italy on par with the rest of Europe for production breaks. They’ve also created a deal with Cinecitta Studios to further lure big Hollywood productions back to Rome. After serving as the local producer of Keanu Reeves' John Wick: Chapter 2, the company will next co-produce Steven Spielberg's historical drama The Kidnapping of Edgardo Mortara this summer.

The company's rise in Italy's film industry has not been without hiccups though. Some observers question the Leones' decision to debut the company's stock on the AIM exchange, a young, fairly illiquid market that was touted as the next big thing. But despite its gains over the past year, the stock trades at less than two times the current year's estimated earnings before interest, taxes, depreciation and amortization. In comparison, the stocks of similar media companies trade at 8-15 times estimated EBITDA.
With some estimates looking for Leone's revenue to double by 2018 from 2013, when it went public, and EBITDA to triple and earnings before interest and taxes to grow four-fold over that time frame, the Leones are also understood to be looking at taking the company private and possibly later relisting on another exchange. The company, according to sources, is eager to get out of AIM and re-launch on the Italian Stock Exchange: Borsa Italiana.
According to sources close to the company, investors believe Leone Film Group could be valued at as much as $500-$600 million on Borsa Italiana, which would increase its current value tenfold.
Leone Film Group is also fielding requests for a potential merger, according to sources. The company spoke with one media giant last year, but determined that their interests were not aligned, says one person familiar with the situation. If the right media company or studio came along and offered a deal that would let the Leones keep their independence, they are understood to be open to a deal. For them, it’s understood to be key that they keep the spirit of a family-run business that has been a hallmark of their brand.
While Leone is one of the few companies in Italy that does content and distribution, sources say the Leones are waiting to see how the industry will change over the rest of the year to see who the lead players will be.
French giant Vivendi has made no secret of its aggressive strategy to increase its presence across Southern Europe. But after its failed merger with Mediaset, Vivendi will have to settle its dispute with Silvio Berlusconi’s company before making further moves in Italy.
Meanwhile, Sky is in the process of being acquired by Fox if regulators approve the planned deal. Sky Italia has recently launched Vision Distribution, a company that has united Italy’s key independent producers to reform the distribution model in the country. And Netflix continues its slow encroachment across the continent.
"The winner of the future is the disruptor who owns both content and distribution," said an investor close to the Leone Group. "That may be somebody we’ve never seen before."
With companies consolidating around Europe, as well as the increasingly rocky political situations in Italy and in other countries, Leone Film Group is carefully investigating all options. But sources say the siblings want to go big and move fast. Insiders believe they will announce a transformational deal before year’s end.
A company representative declined to comment.
Posted by Tom B. at 5:46 AM