A production team has toured the towns of the West: Fort Bravo and Mini Hollywood, in addition to knowing the past and the present cinema history of the municipality and its Desert. 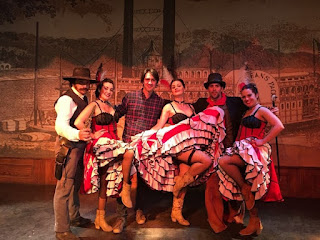 'Le fan tour de Guillaume': this is the name of a series of thematic documentaries that has already begun to broadcast on the French travel channel 'Voyage', belonging to Fox International Channels of France. In their next releases Tabernas and its Desert will be protagonists of these videos through which actor Guillaume Ducreux discovers the themed tourist destinations around the world.

The French actor himself has had the opportunity to see the locations of productions filmed in the Desert, as well as the towns of the West Fort Bravo and MiniHollywood. The documentary is with the collaboration of the Tabernas Town Hall and Almería Western Film Festival. The Mayor, José Díaz, the Councilor for Tourism and Cinema, Mercedes Diaz, and the coordinator of the Festival, Cristina Serena, who have accompanied the production team to different places with the aim of publicizing the past and the present cinematographic of the locality.

In each trip, the French team shows destinations that stand out for a historical purposes, a singing star or a film shooting. During the two days of recording, Guillaume Ducreux has had interviews with western enthusiasts like Rafael Molina and Francisco Ardura, co-owners of Fort Bravo; A group of specialists and dancers of Mini Hollywood; Members of the Association Almería Western Club; And the company Malcaminos, who specialize in tours through the Desert of Tabernas.

The documentary will convey to the viewers tips, routes and establishments to make your travel experience in Tabernas a success. The French Voyage channel is seen by millions of viewers in France, Belgium, Switzerland and North Africa. In addition, this series will be broadcast throughout Europe including Spain, and will be a great informative attraction for new visitors.

This promotion of Tabernas as a tourist destination has been a project of  the City Council for the last year, both nationally and internationally. It is important to highlight the diffusion achieved with the recently launched "Volando voy" by Jesús Calleja, and the participation in a documentary of the travel program broadcast by the Japanese public broadcaster NHK. This demand by the municipality and its surroundings highlight the cultural and natural values ​​of the locality around the world.

The program team has also spent this week in Los Albaricoques, in Níjar, where the golden era of western was once again remembered when it was the scene of the final duel in 'For a Few Dollars More'.

During the filming, the children of the local school actively participated, as well as the local neighbors, who in their day were actors in famous films and remembered those times, when the streets were filled with the great industry of the celluloid.