On this date 50 years ago had its premiere in Rome, Italy. The film was directed by Guido Celano and starred Dan Harrison (Bruno Piergentili), Philip March, Rita Ferrel, and Lilian Faber.
The film was based on the book La montagna spaccata writtern by W. Charlie Reed.

Story: A butler named Jose Desmet, has killed his employer, a former District Judge, who at one time, years before, condemned Desmet's father, a famous outlaw, to death. Then Desmet tries to seduce a miner named Salazar's daughter, who is heir to a goldmine. He also kills another woman and the town doctor because they have found out that he was selling weapons to the Indians. A government investigator, Bill McGregor/Walcom, together with the local sheriff, sets out to put an end to Desmet's atrocities and outlawry once and for all. 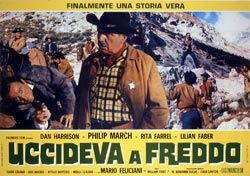