People often wonder and ask what happened to Mike Wood (Mickey Hargitay) in 1970’s “Ringo, It's Massacre Time”. He’s the main character until about a third of the film is over and then disappears. He’s replaced by Jean Louis who plays a character named Ringo who is looking for his missing brother Mike Wood. When I attended a Western Film Festival in Laughlin, Nevada in November, 2000 I was able to ask Mickey about the film. He told me that during the making of the film he received a telegram on November 27, 1966 that his son Zoltan had been mauled by a lion at Jungle Land in Thousand Oaks, California while attending a publicity shoot with his mother Jayne Mansfield. Knowing nothing more than that or how serious his son’s condition was, Mickey tried to get a hold of the producers and director and relay the message to them. He could not get in contact with any of them so he caught the next flight from Rome to Los Angeles and just left. His family came first and he would face the consequences later. He said he was sued for breach of contract and fined $10,000. So Jean Louis was hired and the film was re-written to become a western thriller with a bit of witchcraft thrown in to explain Mike Wood’s disappearance. The film was not released until 1970. 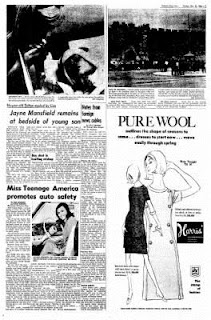