Not Your Typical Western

This is no John Wayne western, even though he was of English, Scottish and Irish ancestry.  Nor is this the spaghetti western of Clint Eastwood's early days.  This is an eight-episode drama about a woman named Annie Quaintain (Jessica Raine – “Call The Midwife”, “Partners In Crime”) who must haul herself and her two children to a rough-and-rowdy railroad camp in 1870s Yorkshire. It may be set in Britain, but it’s a Western, and the tension is universal. Annie must, in short, find a way to survive. 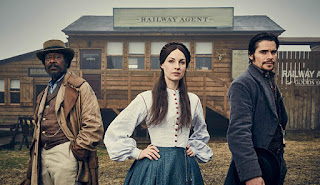 It has been described as the first ever British western – even though it is set in the Yorkshire Dales. The Deadwood-style Wild West frontier town depicted in the series is based on the community created by the building of the Ribblehead Viaduct in Yorkshire in the 19th century – hundreds died building it. 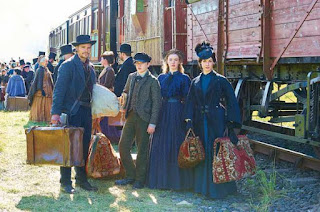 The show’s creator Steve Thompson, a writer on both ‘Sherlock’ and ‘Doctor Who’, says the series was partly inspired by the classic 1953 Hollywood western Shane, which depicted a gunfighter’s attempts to settle into homestead life before becoming embroiled in a bitter dispute over land. While there is none of the endless gun-slinging of a spaghetti western, JERICHO does chart the brutal and violent realities of living in a frontier shanty town.

We chat to the Executive Producer, Creator and Writer of ITV’s Yorkshire-based historic drama, Jericho.

Based on the building of the Ribblehead Viaduct in the 1870s, ITV’s Yorkshire-based drama Jericho follows the story of a family who are forced into navvy life. For the first time, we’re seeing a completely different side of Victorian England.

What gave you the inspiration for Jericho?
Well it’s a true story, when they were building railways across Yorkshire and Cumbria in the 1870s shanty towns appeared. They were like little Wild West towns – they had a tavern and a grocery store and a whorehouse. It’s a history that very few people know about so I thought it would be interesting to turn it into a TV drama.

Is there much historical information on these towns?
What’s funny about it is there’s very little. Very few records were kept in those shanty towns because it was a nomadic culture – people moved around a lot. There are no census records so once you set up the idea of a shanty town you can let your imagination run riot. Some of the events are based on seeds of truth – in Episode One there’s a massive explosion on the railway line, that wasn’t an uncommon occurrence. Safety standards were very poor and death and destruction happened almost every day or every week.

How did you conduct your research?
We have a great team of researchers at ITV but I also spent some time at Ribblehead Viaduct. I was able to meet local people and look at the site of Jericho where it’s actually built – you can still see the foundations. The buildings have all gone but it was very exciting to actually be there and see where it had all happened.

Why did you think it was important to have a historical drama like this set during the industrial revolution?
It was a game changer. The landscape of Britain and people’s lives were changed in a few decades. I remember watching the opening ceremony for the 2012 Olympics in London – they showed the industrial revolution sweeping across Britain, they had the five Olympic rings raised up spitting sparks and it made the industrial revolution feel really exciting, like a time of great promise. Quite often when we see dramas that represent the Revolution they are dingy and grim but it’s great to say, “Look this is a time of great promise, great excitement and real magic.”

Why hasn’t there been a historical drama based on a shanty town before?
Funnily enough most people don’t know about them. There was a Time Team episode on Channel 4 about one, they looked at navvy life but there has never been a drama to my knowledge which has looked into it. I think it’s just one of those pieces of forgotten history, people simply didn’t know that it had happened. In television that’s fantastic, it’s like being given the crown jewels, finding something that nobody has ever done before – it’s like buried treasure.

Can you tell us about the writing process?
A series like Jericho takes about two years from the time we conceive it to the time you see it on screen. Most of the first year for me was spent researching, planning and writing, than most of the second was spent in production.

Were you in charge of casting?
Yes, well there are two executive producers on the show – me and Kate Bartlett and together we make those decisions in tandem with the directors.

Is there anyone you really wanted but couldn’t get?
No I got my first choices, how lucky was I?! The three lead roles are filled by Clarke, Hans and Jess [Ralph, Johnny and Annie] and those were the three people I wanted. It was a dream come true that all three of them said yes – I couldn’t believe it.

Have they lived up to expectations?
Yes. Jessica Raine as an actor manages to convey great strength but also great humor, she has got a really wry sense of humor and she brings that on screen, that’s lovely. Clarke is an actor of extraordinary charisma, he lights up the screen when he’s on and Hans too is very charismatic and warm, you can really relate to him on screen so I was very lucky to get all three of them.

How did you come up with the names of the characters?
I looked in a lot of historic documents – you can see what were common surnames and what were common forenames in that part of Yorkshire at the time. My father teased me because he’s a life-long fan of Tottenham Hotspur Football Club and he tells me there was a famous player called Ralph Coates which is the name of Clarke Peters’ character. Apparently I’ve seen him play when I went with my father as a boy, so his name must have been in my subconscious and without even realizing it I’ve named one of my characters after somebody from Spurs but I didn’t realize I was doing it.

How long did it take to build the set?
It took a period of about four months. The problem was that we were erecting a set in the middle of nowhere. This is not done just outside a studio, we really did have to go and film in the Yorkshire Dales, so everything had to be transported out there. It had lots of challenges. We had to actually construct a new road from the main road to the shanty towns so we could get the crew and the cast out there regularly, and we had to take kitchen facilities out there. We built an entire kitchen area and canteen area for the cast. It was a big undertaking.

Why was it important to film the series in Yorkshire?
The land is a key character in the drama, every time they walk out of their front doors, the hills and the Yorkshire Dales are there – it was really critical that we had that proper flavour.

What has been your favorite part?
The very first time I walked down the street of Jericho when I visited the set. I couldn’t believe it. That was really quite something – it was breathtaking.

Has it turned out as you thought it would?
It turned out better actually. The thing about working with great directors and great designers is that you have a vision of it, then they have a vision of it and it’s always better. If you’re prepared to let somebody take it off your hands and do something original with it, it seems to turn out as something better than you’d imagined.

What has the reaction been so far?
Good critical reaction so I’m told and almost five million people watched the first episode which is good.

Will we be seeing a second series?
I’m sitting writing the beginning of series two as we speak. Fingers crossed we might see it next year, we’ll have to see how we go but that would be nice.