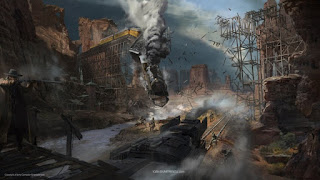 A Reddit rumour claims that inFAMOUS developer Sucker Punch is working on a Spaghetti Western for the PlayStation 4, but there's no truth to it as far as we can tell. The speculation seems to be based upon a bunch of old, unresolved Sony rumours that one poster has just decided to pull together into one place.

The person cites artwork from an undisclosed PlayStation project as the basis of his hypothesis, but our understanding is that the Western concept was commissioned by London Studio as part of a potentially cancelled PlayStation VR game. He also points to an old trademark for a game called Gnomageddon which is surely unrelated.

We can be sure that Sucker Punch is making an open world game, as all of its job listings point to exactly that. The common opinion is that it will be part of a new intellectual property, and not a sequel to the inFAMOUS games. Could we see what it's been working at E3 later this year? We'd put money on it.
Posted by Tom B. at 5:46 AM