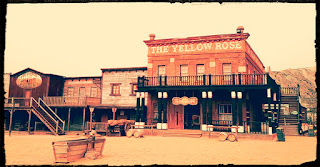 The film The Good, the Ugly and the Bad, by Sergio Leone, is one of the masterpieces of the spaghetti western. Its plot dominates a grand tone that mixes with great silences, close-ups, impressive explosions and a dusty landscape typical of these films.

Some of the scenes of this interesting history of the West, were developed in Oasys Mini Hollywood. In fact, one of them is when Tuco tries to capture Blondie who is saved when he hears the sound of approaching spurs when he was lodged in The Yellow Rose.

The story deals with two gunmen, Blondie, Clint Eastwood (the Good) and Tuco, Eli Wallach (the Ugly); and a corrupt assassin named Sentenza (Angel Eyes), Lee Van Cleef (the Bad) who have to find a treasure trove of gold coins during the Civil War.

Thus, it was in 1964 when the famed director Sergio Leone had the idea of ​​creating a set of cinematographic films which he hoped to to carry out The Dollar Trilogy. The diverse landscape of Almeria and especially the area where it, would make Oasys Mini Hollywood a key enclave for all the films of the spaghetti western genre.

Other films using The Yellow Rose are “For a Few Dollars More”, “The Taste of Killing”, “Navajo Joe”.
Posted by Tom B. at 6:21 AM