We continue to our search for filming locations for the 1966 film “Navajo Joe”. Chuck sneaks up to the corral and shoots and arrow next to Joe’s wrist where Joe is able to cut the rope and then free himself. He kills the sleeping guard and then throws a knife into the back of another of Duncan’s henchmen who is wrestling with Chuck after he found him at the corral.

This scene was filmed at Torremocha de Jarama, Spain. 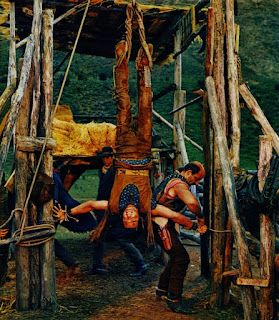