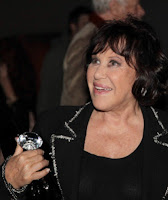 The wife of Sergio Leone passed away on March 20th after suffering from dementia. Born Carla Ranalli, she married Sergio in 1960 and they remained a couple until his death in 1989. She was the mother of Rafaella, Francesca and Andera Leone. Although she never appeared in a Euro-western she did offer her support to her husband during his career and appeared in several documentaries and recorded interviews for many years.
Posted by Tom B. at 12:17 PM