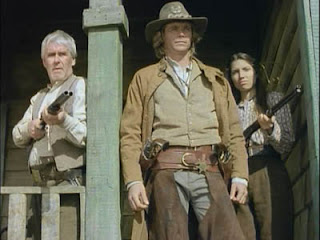 After the American Civil War a determined woman struggles to keep her ranch from being stolen by a greedy and unscrupulous land-baron named Malick. A trio of young men comes to her aid Dusty Fog, the "Kid," and Miguel. They are later joined by a fourth named Mark, who switches allegiance away from Malick, and then by the local Sheriff who's finally forced to stand up to the local tyrant.

This was a sequel to the television film ‘Guns of Honor’ written by British western novelist J.T. Edson. This made to TV western was shown on July 6, 1994. The two films were to be part of a television series based on Edson’s characters from “The Floating Outfit”. These films were shot in South Africa but the series never came to fruition even though they had several name actors on board and the production values were quite high for a TV series.