Among the few figures of the Old West there were few who were as terrible and as fascinating as that of Desperado.  The desperado is the one who has nothing to lose. Without a roof over his head, traveling between wild grasslands and the saloons of the little towns he comes across and that meet the objectives that are only in his heart. He kills without scruples, but not necessarily a bad man. He’s an outcast, trying to survive in a violent environment where the evil forces and the abuse of power, against the weak are calling the shots. A man from the unspeakable past who lives with his principles and nothing else, comes to the rescue in a no nonsense world.

El Desperado is actually a collection of adventures by three different characters, none related to each other: Deguejo appears in the numbers 1/8 (artwork by Camillo Zuffi), El Desperado (hooded) in numbers 9/14 (drawings of Gino Dauro) and the last two numbers there is another El Desperado but he is unmaksed (distributed by Emilio Uberti).

Deguejo - a mysterious man who does not know where he comes from and has no place to go, that runs through the streets of the West to help the weak and the helpless. 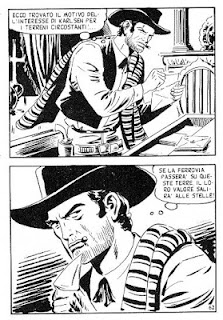 El Desperado - unnamed, wrapped in his black suit, for which  he’s already become a legend for his generous courage. 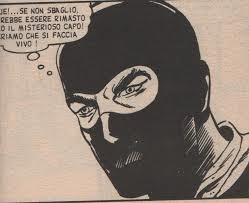 Camillo Zuffi was born in Bergamo, Italy on April 19, 1912. He is the creator of 'Il Piccolo Sceriffo', together with writer/publisher Tristiano Torelli, it first appeared in 1948. He also worked with the characters 'La Jena', 'Bonnie' and 'Tex Tone'. He worked primarly for the Italian and French markets, but was also present in Britain with 'Kit Carson' in Cowboy Picture Library and 'Mustang Grey' in Pearson's Western Picture Library. He illustrated several issues of 'I Misteri della Giungla Nera' starting in 1977. He died in Bergamo, Italy on April 4, 2002.

Gino Dauro was born in Asti, Italy on February 9, 1932. A designer, illustrator and writer, he began working in 1958 collaborating with editions of Mark Pines, Renato Bianconi, as well as with Edizioni Audace.  In 1960 he began a long collaboration with the Universe, creating numerous stories for the 'Intrepid, the' Albo dell'lntrepido and The Brat.  For Astoria he draws for Alboromanzo Vamp and Teddy Bob.  Gino then creates the comic for adults JUSTINE.  Collaborated again with the Universe, and with Corrier Boy with Editions des Rempart.