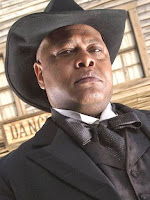 American stage, film and TV actor William Byrd Wilkins died on October 31, 2015. He was 50. Born in Louisburg, North Carolina in 1965, Wilkins left his hometown and appeared on stage in the Minneapolis-St. Paul area for many years before travelling to Alaska, London and New York. He’s best known to Euro-western fans as the preacher in the 2012 TV episode of 'Doctor Who: A Town Called Mercy' which was filmed at Fort Bravo, Almeria Spain.
Posted by Tom B. at 4:22 PM